About the Venado Caves:  A 2,700-meter stretch of limestone caves thought to have formed 15 to 20 million years ago as a result of tectonic shifting and underground rivers.

I took one more look at the tiny hole in front of me and my heart moved into my throat. I went on my hands and knees, put my feet into the hole, and smiled as best I could for a picture. I grabbed the sides of the walls and pushed myself down, down, down. I could not believe that I was pushing myself through a hole called the Birth Canal. 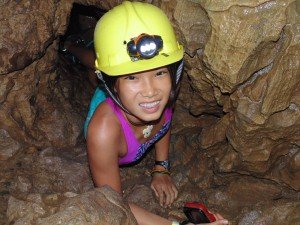 I was excited because I had never been in a proper cave before, and on the eighth day of my EcoTeach trip to Costa Rica I found myself deep in the Venado Caves.  We explored the two main parts of the cave system and the highlight of these vast caverns was their smallest feature, the Birth Canal.

As soon as the group got to the place, we all raced out of the bus. You could tell the excitement was high.  We went to a little shack and got on our helmets that had little lights attached to them.  We walked down a steep hill to the opening of the watery cave and then splashed our way into the cave and into the darkness.  As we were walking through the cave, our guide suddenly stopped, reached into a rock, and pulled out a huge, scary crab spider.  He turned around to show us.  He told us about it in a happy and cheery voice, like he was not holding a humongous spider.  He even held it up against his other hand so I could take a picture.  I took a quick picture and moved as far away from it as I could.

Finally, the guide put back the spider and we continued walking in the ankle deep watery cave.  We then came to the Birth Canal.  All the boys were crowding around it eager to go in it.  The guide had to ask everyone if they were claustrophobic and if they were, they would have to leave.  It took a long time to get people out, and I was starting to get impatient.  Finally, they allowed us to go in, one by one.  After quite a long wait, it was finally my turn.  I looked dubiously down the hole and took a deep breath.  I was ready.  I climbed into the hole and looked at the camera for a picture.  After the picture, I nervously grabbed the edges of the wall, and I pushed my head into the dark hole.  A second later, I climbed out into a bigger area.  The guide was standing there and told me to step on his back.  At first I was really confused, but then realized that I had to climb a wall.  I then stepped on his back and scrambled onto a ledge.  Those of us already through waited while everyone else made the short trip and then we climbed out another hole.  Finally, we got to the main cave area.  We wound our way through the stalactites and stalagmites of the main cave before we had to go down on our hands and knees.  We crawled in water up to our chest and suddenly popped out of the tunnel near the entrance.  We emerged having passed through a hidden world – a quiet, secret place that we shared with each other and the Earth. 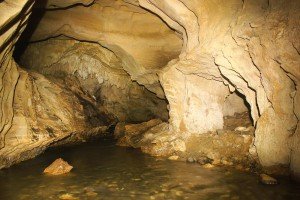 The caves shared their secrets with us and showed us what water and time can do and can form.  It also showed us how different life forms adapted to the environment of a cave.  I always enjoy learning new things, but I’ve experienced very few places that left me feeling so intrigued by new knowledge.

← Preparing for our trip to Costa Rica!Turtle Blog from the Osa Peninsula →