Project:  EcoTeach has partnered with WIDECAST, an international non-profit organization dedicated to sea turtle conservation in the Caribbean region, to help study sea turtles in Gulfo Dulce on the Osa Peninsula of Costa Rica.  EcoTeach volunteers play a vital role in collecting data about population structure, genetic origin, in-water habitat use and health status of the turtle population.

I squinted my eyes to make sure that I read the number correctly.  “42.8,” I shouted out to the recorder.   If you had told me six months ago that I would have the once-in-a-lifetime chance to measure the width of the carapace of a black sea turtle, I would have called you crazy.

We had split into two groups on the third day of our EcoTeach trip to Costa Rica.  One group was called the “Hawksbills” and the other was called the “Green Group.” Each group was to spend one day helping the local marine biologists measure and tag sea turtles, while the other group helped with mangrove reforestation.  The next day the two groups switched jobs.  I was super excited that my first day, as part of the Green Group, was at the turtle testing station.

The turtle project was the main reason I went on the Costa Rica trip.  At the turtle project, we set out nets and waited for turtles to swim into them. Once we got a turtle, we brought it to the beach to take blood and tissue samples and give the turtle a tag if it didn’t already have one.

In the morning, we got to the beach, grabbed our stuff, and the Green group got into two boats and motored away.  After a while, we stopped and the two scientists in charge laid a net into the water. Everyone in my boat jumped out and helped untangle the net.  After we finished with the net, everyone raced to the beach.  The Green Group waited for three hours and then had lunch.  During those three hours, I swam a lot and ate a humongous coconut.  I started to worry that we might not catch a turtle and that was a super sad thought.  Out of nowhere, some of the scientists from the turtle project suddenly hopped into boats and went out to the net.  A few minutes later they came back with a female hawksbill turtle.

flippers.  I put on some gloves and I rushed to the boat.  I was allowed to help get it out of the boat!  I grabbed a front flipper, put one hand under her shell and pulled.   I scrambled to the red restrainer that we had set up and gently placed her down on it. Everyone helped to move her quickly through the process of taking her blood and tissue samples, weighing her, and putting a tag on her (she needed a new one since the one she got earlier in her life fell off).  Finally, we let her go.  As soon as she was away, we all jumped into boats and sped off to where our bus was waiting.  It was now pouring rain and we were all thoroughly drenched, even the Hawksbill Group. I could not help but laugh when I saw that all the mangrove trees looked like bushes because the water level had risen so much.  Everyone scrambled on to the bus and we drove away.

The next morning we switched things up.  This time, the Hawksbill Group got into the boats and sped away.  As for my group, a boy from my school and I grabbed a wheelbarrow and caught up with the rest of the group as they walked down a dirt path.  After a bit of walking, we got to a little cleared 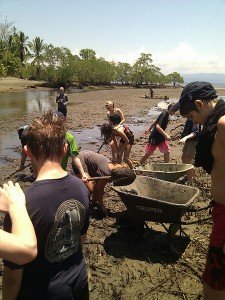 section of land with a boxes filled with baby mangroves.  All the boxes were covered with blankets that hung from above.  We all sat down and drank a ton of water.  It was super hot and we were all tired from walking.  After we had  some water, we followed the two scientists in charge to  another area.  There, we dug holes and planted the baby mangroves.  After that, we measured them.  We walked a little more and then got to a good place to collect mud.  We got out shovels and dug up mud.  We then put the mud into a wheelbarrow and rolled it to the place with all the baby mangroves.  Done with that, we climbed into boats and sailed to lunch. When we got to the beach, the first thing my group did was hop into the ocean.  Then, we ate lunch.

While we were eating lunch, the project people caught three black sea turtles.  The first two I did not get to help with, but on the third they let my group do it.  While they were measuring and taking samples, I got to hold the turtle’s front left flipper. I also got to hold it when we had to flip the turtle over.  I struggled with it and no wonder – it weighed 67 kilograms, which is 147 pounds.  Finally, they let me measure the carapace of the shell, which is its underside.  I was so excited.  My hands were shaking with excitement as I took the measurements.  Too soon, it was over.  My group climbed into a boat and went back to our station.  We then helped collect three types of mangrove seeds: white, black, and tea.  When we were done, the people of the turtle project were super nice and opened up their store for us.  When we had all bought what we wanted, or at least what we could afford,  we dashed to the bus and drove back to our hotel.

I enjoyed those activities immensely. I really think that they helped my friends and me learn a lot.  Both days showed us how much humans can impact the world, negatively and positively. It also showed us that we need to help all we can to protect the ocean and world.  These are among the  activities that meant the most to me, because I want to become a marine biologist when I grow up and I got to see what it would really be like.