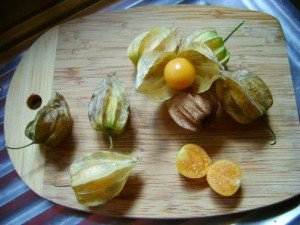 fruits and vegetables and peeled back the outer layer to reveal a tiny yellow fruit inside. “The fruit of love, ” she said and handed it to us to eat. “This will be your breakfast juice tomorrow and after you drink it I will show you where it grows.” The following morning she led our small group through her lush garden pointing out not only her plants (she grows incense among her flowers and fruits) but also how the farm recycles ordinary items instead of buying materials. Used tires form steps and garden beds. Used rubber boots become the insulating base for the house. Broken glass gets mixed into concrete for benches. Discarded stuffed toy animals get turned into garden scarecrows.

In the isolated rural community of Providencia in the Los Santos region of Costa Rica the residents have had to make do with what they have as both an economic and environmental necessity. Located about three hours from San Jose, the community is reached 12 kilometers off the Pan American Highway down a narrow, winding, dirt road that borders Parque Nacional Los Quetzales, the newest addition to Costa Rica’s expansive park system.

The earliest settlers in the lush river valley were workers building the Pan American Highway in the 1930’s. While hunting for food they followed the Brujo River and found a fertile valley with wild blackberries that could sustain their families. Declaring that it was providence that led them to their discovery, they built houses, grew food and named their tiny community Providencia. In 1946, more families came over the mountains into the valley and, as the story is told by their adult children, lived under a rock overhang for two years while planting gardens and building houses. Those early pioneering families still live in the same four neighborhoods that form Providencia de Dota – La Roca, La Piedra, Zapotal and El Centro. 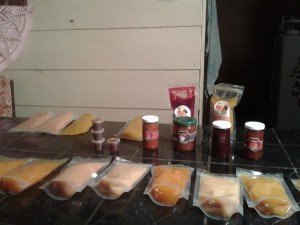 Struggling to make a living, the residents of Providencia have turned to rural tourism as an income source. Dona Noire, her husband, Oscar Aguilar and their three children, operate Armonia Ambiental Lodge, in their abundant organic farm that brings in volunteers annually from all over the world to work and learn sustainable agricultural practices. EcoTeach uses this rustic dormitory styled lodge for many of their tours. Up the road in La Piedra, Ana and Enrique Calderon Aguero also run a small lodge and restaurant, La Cabina la Piedra and operate a small coffee plantation. Their neighbor, Flora Valverde Elizondo has learned to produce juices, jams, nectars and salsa from both the wild and cultivated fruits and vegetables in the area which she sells out of her home along with handicrafts made of recycled newspaper. Her neighbors teach tourists how to make newspaper handicrafts.

Within the last decade, Providencia has been discovered by the international rock climbing community as a prime location for bouldering (climbing small rocks without the aid of ropes). Organized and supported as a national sport by the Costa Rican Mountain Sports Federation, Costa Rican climbers have consistently dominated Central American rock climbing competions, a record that has been noticed by the climbing community and so a small but developing adventure sport tourist infrastructure is Providencia’s latest effort to bring economic stability to the community. Providencia guides offer bouldering, hiking and mountain biking. An annual Bouldering Festival is sponsored each February.

In the future, some residents of the community hope to use the rich rain forest and cloud forest 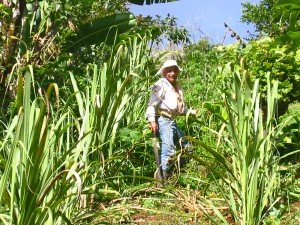 ecosytems that can be found in Providencia to open a small biological research facility that will bring in not only scientists, but also volunteers who will teach English and research and science skills to Providencia’s youth. Such an initiative will provide more opportunities for the next generation to obtain or create jobs that allow them to remain in the area and continue its proud history as an enterprising, self-sustaining community.

You can visit Providencia de Dota and other sustainable Costa Rican communities on any of these EcoTeach tours!

← Inside EcoTeach Guide TrainingStudent Field Notes from the Amazon →