2016 Student Field Reporter Project:  EcoTeach has enlisted the help of several students to share their 2016 Costa Rica experiences with us. Over the coming months we will regularly feature their posts, photos, and reflections – letting them tell their amazing stories of Costa Rica and it’s impact on their lives!

It’s been two weeks since I’ve returned from my trip to Costa Rica.

I replay the moments in my head as if it were a movie starring my friends and me.  My favorite moments to watch are climbing Arenal Volcano, exploring the town of La Fortuna, and getting to know my home stay family of Don Fabio and Doña Rosa.  The feelings of adventure and learning are what I remember most about my trip.

One of my favorites is running down the forest path at the foot of Arenal Volcano. We had hiked up earlier to a boulder field at the base of the volcano and half the group wanted to return the way we had come but the other half wanted to take a new route suggested by our guide. I decided on the new route. It was much longer so we had to jog to get back to the bus at the same time as the rest of the group.  I remember the feeling of just being able to run. The forest enveloped us — the trees with their leaf-covered fingertips in the sky, the birds singing, the monkeys calling, flowers and bushes spread in every direction.  And just running.  It felt natural, in some primal sense of the word, running, with a pack of my friends around me, all of us keeping pace, rising over roots and turning and speeding and slowing in sync, too breathless to speak. 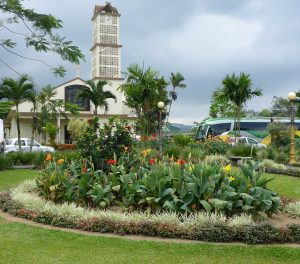 Then there was the feeling of exploring the town of La Fortuna.   I remember the square at the heart of the city the most.  At one end, there was a large, open-air church with its lofty tower watching over the city. Behind it was Arenal Volcano, standing tall and magnificent against the sky, sloping down to town. The park had eight paths leading from the corners and the sides – like the eight cardinal points – to a cool fountain in the middle.  I remember walking around the square, looking at all the tiny white shops with clay or tin roofs and at the troves of brightly-colored absolutely everything inside the non-descript buildings.

The quiet night with our home stay family might be my most cherished memory. My roommates and I were all exhausted from that days’ shenanigans and we had gotten back very late. We were all eating in the living room, Don Fabio and Doña Rosa (the elderly couple who were hosting us), two of their grandkids, my five roommates, our guide/translator and me. We were all sitting, eating rice and beans, tamales, and what I think was heart of palm (I’m still not sure).  The house was open-air and small, the dark jungle warm and quiet.  We were watching some Disney spin-off movie that had been translated to Spanish, with low conversation in-between at times. The youngest grandson sat with me on my bed that was in the living room and asked to see my sketches of the trip. I obliged.  The family was tired and content, just eating and watching TV together. It was a wonderful, quiet pause on a very busy trip.

I now realize how lucky I am.  My world of “commodities” is so much bigger than theirs.  Now, I feel bad when I waste things that they have never even owned – things in my life that I hadn’t bothered to notice before.  My classmates and I got a crash course in a different culture, and we learned so much from it. We learned about a tiny slice of the diversity in the world.  I also learned that these emotions – distilled from my personal and group experiences on one short stay in Costa Rica – will be with me for the rest of my life.  Finally, the sheer beauty of everything I saw.  Well, not a lot of people get that, but when you do, you appreciate its worth, and treasure it.